When protestors filled the streets last summer, the nation — and newsrooms in it — asked itself, again, about racial equality and justice. But what would actually come of this racial reckoning? For Politico, one answer is The Recast.

Launched last week, the new twice-weekly newsletter examining how race and identity shape politics, policy, and power is many months in the making. The idea was first proposed in June during a regular “What are we missing?” meeting in the newsroom. As the D.C.-based journalists deliberated, demonstrations over racial inequality and police brutality sparked by George Floyd’s killing were in full steam.

“All of these conversations around diversity in coverage and diversity within newsrooms started to become way more open. We saw a willingness to talk about it in a way that we hadn’t before — at every single level of the newsroom,” said Rishika Dugyala, a digital strategist at Politico who has helped bring the newsletter to life. “One of our colleagues brought up, ‘Would we consider a race and identity newsletter?’ and immediately, we had reporters, editors, and strategists chiming in and signing on.”

What began at the “What are we missing?” session has grown into something close to existential for Politico. Senior editor Teresa Wiltz says that The Recast “expands the notion of who’s a ‘politico’” and the first issue argues that “power dynamics are changing.” A promotional video drives home the point that policy knowledge (and influence) are not exclusive to Washington, D.C. — or any one demographic.

Race and identity have long determined who has power and who makes decisions. But power dynamics are changing.

That’s why we’re bringing you The Recast, a new newsletter with fresh insights and voices that challenge “business as usual.” https://t.co/kaeLtHyMXt pic.twitter.com/mKkI0L3h2q

Wiltz — who will steer The Recast until NPR’s Brakkton Booker joins Politico as the newsletter’s author at the end of March — emphasized that she wanted to create something that would draw on the entire newsroom. She flagged the industry-wide tendency to treat race-related editorial efforts as a side project as a particular challenge. “Race is something we all own,” she noted.

As she and Dugyala write in The Recast’s first issue, issues related to inequality and identity are on the national agenda “like never before”:

[T]hanks to intensive grassroots organizing, communities of color now wield real political power. Black and brown voters played a pivotal role in the presidential election and in flipping the Senate. This is the most diverse Congress ever. Georgia sent a Black man and a Jewish man to the Senate. And a Black/South Asian woman is the vice president.

We’re in the midst of a massive revolutionary change in this country — the 21st century version of the 1960s. “White” shouldn’t be the default, the assumed norm — and indeed, the share of white voters is on the decline in all 50 states, while the share of Latino voters is on the rise. If anything should be clear about race and ethnicity today, it’s that we all have a race (or races) and/or ethnicity/ethnicities. And that informs our experience in the world. White folks, too.

… Race and identity are an integral part of the DNA of American politics and policy. It informs our past, our present and our future. But power dynamics are changing. “Influence” isn’t just confined to the political establishment.

Dugyala said the digital strategy team wanted to make sure they were creating something that would fill a gap in coverage at Politico, and in political journalism at large. 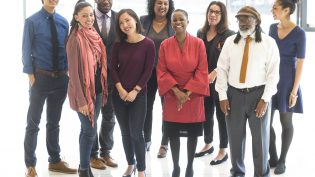 “Let’s figure out whether there’s something new not only for our company, in terms of how we think about coverage, how we think about signifiers of newsworthiness, who we’re thinking of as power players, who we turn to as experts leading conversation on policy and policy, but also something new for the market,” she said. “Is there something different from Code Switch from NPR or Race/Related at the New York Times or About US at The Washington Post or all the different products that are already out there?”

The Recast joins a roster of 35 newsletters, not counting the editions available only to Politico Pro members. The newsletter will land in inboxes on Tuesday and Friday afternoons, and the earlier edition will be the newsier of the two.

In the inaugural issue, the newsletter led with reporting by Maya King, Politico’s race and politics reporter, that shows there’s a disconnect between the most diverse Congress in history and the Hill staffers who work for them as well as an exclusive demographic analysis of state legislatures. (The takeaway? “In many states, the officials elected to legislative office don’t look much like the people they represent.”) On Fridays, the newsletter will feature a interview called “The Sit Down” as well as cultural recommendations from reporters and contributors. On its first Friday, The Recast featured Sen. Cory Booker discussing the impact of Covid-19 on farmers of color and suggestions to watch “The United States v. Billie Holiday” on Hulu and a light-hearted TikTok.

The Recast feels like a smart bet for Politico, which has built its reputation on locating the levers of power and providing context that help readers understand what (and who) is driving politics and policy. The Recast will feature traditional politicians (see: Booker) but also artists, entertainers, and activists, Wiltz and Dugyala told me. Emerging candidates — including ones from untraditional political backgrounds or without the massive campaign war chests that newsrooms tend to rely on to gauge a candidate’s seriousness — will get a closer look as well.

“How do we determine when a candidate is viable? Are we looking at fundraising numbers? Are we looking at who’s endorsing them? Is that why so many of us missed the rise of AOC in 2018?” Dugyala asked. “That’s one example of redefining what we wait on to signal what we write about. We’re not going to wait on lawmakers to tell us how cannabis policy intersects with policing and racial disparities because they’re not necessarily the experts here. We have to go to community members and academic researchers who are speaking and putting out work on this consistently instead of waiting for a bill to be introduced on the hill.”

If they do their job, there may be less to talk about at the next “What are we missing?” meeting.