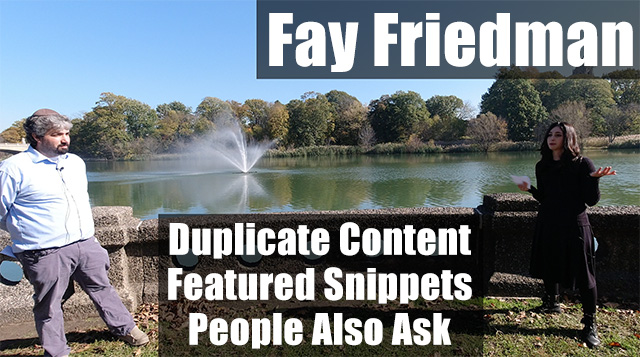 In part one, Fay Friedman and I spoke about E-Commerce SEO vs Other SEO & Common SEO Audit Issues in part two we spoke more about duplicate content, featured snippets and people also ask. We first talked about duplicate content and duplication of URLs. I referenced when Gary Illyes from Google went deep into the topic of how Google does its dupe-detection. Fay said there are so many basics that people forget about with duplicate URLs, such as www vs non-www, HTTP vs HTTPS, canonical URLs and so much more. There is so much around duplicate content that people forget or don’t have time to deal with. Now in Google Search Console, via domain properties, it consolidates a lot of the more basic duplicate URLs. Google is generally pretty good at handling it but the job of an SEO is to not make Google think which is the canonical but for an SEO to tell Google which the canonical URL is.

Then make sure to markup the page with FAQ and Q&A schema to enhance it more. Google has said structured data doesn’t help you rank better but it does help your content standout. She said it is harder to rank one page for multiple featured snippets but it is possible. I briefly mentioned the speakable markup feature Google released years ago, I still use it by the way.

You can subscribe to our YouTube channel by clicking here so you don’t miss the next vlog where I interviews. I do have a nice lineup of interviews scheduled with SEOs and SEMS, many of which you don’t want to miss – and I promise to continue to make these vlogs better over time. If you want to be interviewed, please fill out this form with your details.