Picture Yahoo users and you probably envision a group that’s older and a bit less digitally savvy than those relying on, say, Google’s suite. (The research says you’re not wrong.) On TikTok, in contrast, 63% of users are younger than 30 — including 33% still in their teens. So you might be thinking: Yahoo News? On TikTok?

But here’s the interesting thing. Yahoo News (which has long been one of the most-used online news brands in the U.S. and around the world, even if you don’t know anyone who uses it) isn’t just on TikTok — it’s one of the most popular news organizations on the platform. The Yahoo News account now has 1.1 million followers, including many, presumably, who are encountering the brand for the first time. Launched one year ago this month, Yahoo News is outpacing CBS News (947,000 followers), USA Today (895,000), The Washington Post (894,000), NBC News (644,000), and plenty of others. (It’s behind NowThis News, which has 2.5 million followers, and The Daily Mail, with 1.5 million.) 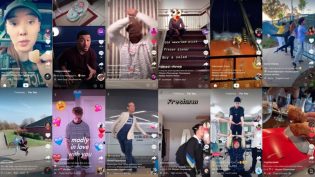 The content leans on fairly straightforward news coverage and service journalism geared toward the platform’s younger audience. In recent days, for example, there have been posts about the Covid-19 stimulus bill, a “360” look at raising the federal minimum wage, and early career advice pegged to Women’s History Month.

I wanted to know more, so I talked to Munslow and Joanna Lambert, head of consumer at Verizon Media, about why Yahoo News joined TikTok in the first place, combating news fatigue, and what they think Gen Z wants from a news organization.

Yahoo News maintains a newsroom of about 40 and also aggregates news from more than 100 partner sites. It does not have a subscription product and the homepage is a fairly straightforward list of news stories with ads interspersed. (On a recent weekday, the top ones were “Conjoined twins share appalling news after nine years,” “Food you shouldn’t buy under any circumstances,” and “Hilarious tattoo fails (#12 may never be employed).”) The company, naturally, pays close attention to traffic trends, starting with the fact that more and more web traffic has been coming from people using mobile devices.

“We realized the way news is consumed has changed dramatically and we needed to evolve the way we meet new customers, and especially to meet them where they are,” said Joanna Lambert, head of consumer at Verizon Media. “In 2020, we put an intentional strategy in place to think about how to be mobile-forward and how to be on new platforms that could be more engaging with audiences. A key part of that strategy has been around TikTok.”

2020, of course, wound up being an outlier year. There was an unexpected uptick in desktop usage as many people stopped commuting or straying far from home during the pandemic. Still, Yahoo saw a 24% increase in mobile web and app users compared to 2019. It wasn’t the only good news for Verizon, which owns Yahoo News as well as sister sites like Yahoo Finance. In January, Verizon reported its first quarter of revenue growth since acquiring Yahoo for $4.48 billion in 2017, fueled by a 25% increase in ad revenue compared to the previous year and an 11% increase in daily active users for its news products.

After years of cutbacks and the highlight at quarterly meetings being that the “declines are declining,” the company feels like it’s found a workable strategy. “We expect the evolution to continue to be on mobile,” Lambert said. “That’s where we’re investing our resources now.”

Lambert, for her corporate title and 30,000-foot view, sincerely seems to appreciate the cheekiness of the account, even when it touches on Yahoo’s reputation as something of a digital dinosaur. “I actually love the ‘Yes, we still exist’ line. It’s fun, and it takes a dig at the fact we’ve been around for a long time,” she said. “It says we’re committed to staying relevant today and into the future.”

Munslow, previously an intern and associate editor at Yahoo, had recently returned to the company following a year teaching in Malaysia. Her students introduced her to TikTok and she saw firsthand that, in addition to being a low-stakes way to practice conversational English, the platform was accessible, flexible, and, importantly, fun to use. “I think we have to get on TikTok,” she told her manager on her first day back. 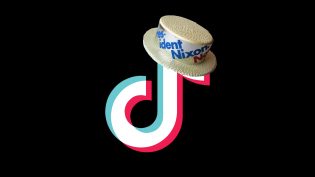 Yahoo knew its TikTok strategy had to be more than a copy-and-paste job from its website, but the team wanted to make sure it was introducing itself as a nonpartisan (“Yahoo purple” was mentioned), fact-based provider of news to users who may be encountering it for the first time.

“I think we’ve been very successful building our brand and audience on TikTok because we’ve been very authentic with the audience about who we are and what we offer,” Lambert said. “We didn’t take our Yahoo News content and just sort of transport it to a different platform. On TikTok, we are news for Gen Z delivered by Gen Z from the trusted Yahoo newsroom. What we’ve been able to do is provide that fact-based news, but inject an element of fun and engagement into it.”

The Yahoo News TikTok account ended up launching on Super Tuesday after a late night brainstorming the best way to promote the newsroom’s election coverage to new audiences. But before the launch, Munslow said she logged hours looking at what other news organizations were doing on the platform and immersing herself in the larger TikTok community.

It was important to Munslow — who, at 24 years old, qualifies as a member of Gen Z — that Yahoo’s voice on the platform was both highly accessible and primarily journalistic.

So what are the topics that Gen Z cares about?

Research indicates they’re more politically engaged but less bound by party labels than preceding generations and Munslow said that in terms of hard news coverage on TikTok, nothing beats politics. Yahoo’s coverage of the presidential inauguration and a two-parter on Biden’s “Day 1” actions, for example, pushed its account over the one million mark, earning it 92,000 new followers in 24 hours.

“In the 2008 recession, they watched parents lose jobs, and their family friends lose jobs. And now, we’re in a pandemic that has brought another huge blow to the U.S. economy,” Munslow said. “Personal finance is huge on TikTok. We know they really care about that.”

The account doesn’t shy away from heavy material. Yahoo News has posted more than 30 videos covering the violent riot at the Capitol in early January. Its on-the-ground reporting in D.C. included the clip of “Elizabeth from Knoxville” that has been viewed upwards of 31 million times.

But, also? It’s not that serious.

“TikTok is a place for fun and for creativity,” Munslow said. The Yahoo News account doesn’t go in for dance videos. “Part of that is because I’m not, uh, the world’s strongest dancer,” Munslow says. But it’ll join in other trends.

Different content appears each user’s “For You” page. You might get more vegetarian cooking content, while someone else sees more Jayson Tatum highlights. To get the full picture, the team relies on a Slack channel where Yahoo News staffers active on TikTok drop trends and other ideas for the account.

When videos using hypothetical group chats starting popping up everywhere, for example, the team used the format to explain where various Republican leaders stood on impeachment.

TikTok makes it easy to reuse sounds, or music, from other videos. (Think of the sea shanties that went viral earlier this year.) Incorporating a trending clip is another way that Yahoo News finds new audiences. They recently used music (“The Juice by Mr Fingers“) that’s been featured in nearly 27,000 videos in a TikTok following a journalist taking her mother to get a Covid-19 vaccine.

@yahoonewsCome with me as I take my mom to get her COVID-19 vaccine in California! @angelaishere #news #covid19 #vaccine #covidvaccine #yahoonews♬ The JUICE by MR FINGERS – Han

Every TikTok, no matter how playful, goes through a formal editorial process.

Munslow typically starts the day reviewing footage available to use through partnerships and what’s produced by the Yahoo News newsroom. She compiles a list of topics or articles that could be turned into TikToks. Once selections have been made and footage has been edited, Munslow or another editor will screen record the draft in TikTok, including captions, hash tags, title, and the video itself. That recording winds up back in the dedicated Slack channel where editors check facts and ensure the caption and subtitles are typo-free.

If the team is creating an original video — like for the Yahoo 360 videos representing “every side” of an argument — the script goes through an editing process before they’re recorded.

@yahoonewsShould the minimum wage be raised to $15? Here’s a look from every angle, with a 360. ##minimumwage ##yahoonews360##yahoonews##politics##news##jobs♬ original sound – Yahoo News

One other tip? Munslow highly recommends using subtitles and captions.

“It makes it easier for your audiences to understand what happening in the video and makes the video more accessible for all audiences,” she said. “Subtitling has proven to really help us when we’re going through the editing process and making sure our content is accurate.”

Rethinking engagement — and continuing to experiment

Yahoo News — like a number of other news organizations — has done away with its comments section. That was not a particularly popular move. (The first several pages on Yahoo News’ feedback forum show users comments’ return.) But, on TikTok, Munslow says she prioritizes engagement and encourages comments and questions.

“We look at our comments a lot, and we try to comment back to them as much as possible, whether it’s to answer a question they have about a news topic or something more fun and light and conversational.” She has clarified what’s in a particular piece of legislation and, when asked, named her favorite cookie (“white chocolate macadamia”). “It shows we’re humans, we care about their lives, and what’s relevant to their lives,” Munslow said.

Ultimately, reaching more than one million followers within a year has meant trial and error, Munslow said. What resulted in a viral TikTok this week might not work the following week — or for a different account. Sometimes videos — like a series that answered questions about Trump’s second impeachment — don’t do as well as she expected. It’s all part of the process.

Besides trying to keep videos under 30 seconds, Munslow said she has no fool-proof tips for news organizations that would work better than testing different videos and formats themselves.

“I have been trying to figure out the algorithm since we got on,” she said. “I think the biggest pieces of advice I can give to any organization, even outside of news, trying to get on TikTok is to experiment.”