On March 17, the day after the Atlanta spa shootings that killed eight people — six of whom were women of Korean and Chinese descent — the Asian American Journalism Association (AAJA)’s website crashed.

“We’re troubleshooting @AAJA website, which is crashing from the traffic after we released guidance on covering the Atlanta shooting. It’ll be back up shortly, but please share these screenshots in the meantime,” AAJA president and Washington Post reporter Michelle Ye Hee Lee tweeted.

The AAJA had outlined guidance for newsrooms to cover the mass shootings without perpetuating harm toward the Asian American communities impacted by the tragedy. It reminded journalists to “cover the shootings in the context of the current rise in attacks on Asian Americans. These shootings have come during a time of increasing attacks on the AAPI community, and heightened fear among AAPI communities across the country,” and “Take caution with language in news coverage that could fuel the hypersexualization of Asian women, which has been linked to violence and discrimination.”

If the AAJA’s website crashing was anything to go by, it was clear that mainstream newsrooms were struggling to effectively and ethically cover the elements of misogyny, racism, and class that were entangled in the Atlanta mass shootings. It was also clear, from much of the resulting coverage, that mainstream media needs that guidance.

“Asian communities in particular remain invisible in traditional media,” said Kavitha Rajagopalan, the community engagement manager at the Center for Community Media at CUNY’s Craig Newmark Graduate School of Journalism. “But Asian community media have been covering the many crises that now seem to be coming to a head for decades.”

Within the first few hours after the shootings, there was a noticeable difference between mainstream media news outlets and local Asian news outlets in their approach to covering the Atlanta mass shootings. Most visible was the lack of community-driven and critical reporting from the mainstream media, even by big publications with the resources to deploy reporters on the ground.

Coverage of the Atlanta shooting that happened last night skirts around the details. It’s not: “Atlanta shooting leaves 8 dead.” A man killed eight people, seven of whom are women, six of whom are Asian women. Stories need to make clear and specify this up front and in headlines. 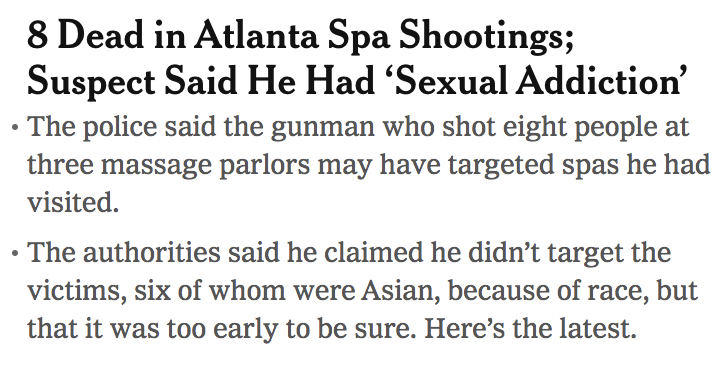 For the record, it’s not just @nytimes that is wrong on this: pic.twitter.com/swMyLsioY1

Shameful headline, @Reuters. How dare you try this. pic.twitter.com/NR2gSgZrDx

Instead, many national outlets parroted law enforcement officials (who appeared to take the shooter’s denials of any racial motive at face value) and focused on digging into his identity.

The New York Times’ Michael Barbaro opened the March 18 episode of The Daily podcast with a two-sides narrative, saying the killing “has stirred fear and outrage among Asian Americans, who see it as the latest burst of racist violence against them, even as the shooter himself offered a more complicated motive.”

The predominant media narrative cast doubt on racist intent behind the mass shootings — despite the facts that the businesses attacked were Asian-owned, the majority of victims were of Asian descent, and the shootings took place amid an uptick in anti-Asian hate crimes across the country.

When Asian women are so routinely erased and assumed passive that it’s embedded in language. pic.twitter.com/Ursuv92eXh

I found @WSJ‘s coverage of the Atlanta shootings lacking. It led with the shooter’s perspective AND didn’t reference the broader AAPI implications until the 20th paragraph. No whiff of racism as an issue in the headline or lede. Barely a nut graf. Where was the editor? pic.twitter.com/iwxTaINZRP

By comparison, reports from Korean news outlets centered on interviewing locals, community leaders, and government entities like the Korean Consulate in the immediate aftermath of the shootings. The Korea Daily learned the Korean victims’ ages by speaking with people from nearby stores, and the Korea Times Atlanta cited a witness account that alleged the shooter had yelled “I’ll kill all the Asians” before the attack.

Jeong Park, a reporter for The Sacramento Bee, began compiling a thread on Twitter with news reports by Asian news outlets in Atlanta. He noticed a difference in reporting right away.

“The first thing that’s very noticeable is who they’re choosing to quote,” said Park, who started the thread to follow how Atlanta’s Korean-American community was responding to the mass tragedy. “We saw [Korean media] very early on quote the eyewitnesses, having them and their words drive the discussion versus the mainstream media, which early on relied heavily on law enforcement.”

(Captain Jay Baker of the Cherokee County Sheriff’s Office, who downplayed a racial motive in the Atlanta shootings to reporters, was removed from the case over anti-China content he had posted on social media.)

Mainstream media outlets rushed to publish stories on the gunman’s life. The Daily Beast’s first report on the Atlanta slayings was headlined “Massage parlor massacres suspect said he loved guns & God” and featured an interview with the gunman’s former classmate who described him as someone who “wouldn’t even cuss.” CNN published a report containing an in-person interview with the shooter’s grandmother.

Most mainstream outlets didn’t publish pieces about the Asian victims (two other victims were identified as white) until days later. By then, information about the victims and their families had been trickling out of Korean news outlets.

almost 48 hours after the shooting and it feels like I know almost nothing about any of the victims. where are all of the long, heartbreaking profiles and vignettes that sprout up 24 hours after every other mass shooting?

“I think it took a day or two before the English [language] media caught up to that,” Park said.

The U.S. has the highest rate of mass shootings in the world, but despite that unenviable distinction, the media is still covering the violence without a playbook.

Ruth DeFoster is the director of undergraduate studies at the University of Minnesota’s Hubbard School of Journalism and Mass Communication and a former journalist who researches American media coverage of large-scale tragedies. She’s been surveying journalists from top newsrooms, asking them whether their workplaces have policies for covering mass shootings. “To my surprise,” she said, “I am finding that the answer is no.”

The absence of standardized rules on how to document mass shootings is a potentially dangerous oversight. DeFoster cited evidence that highly publicized mass shootings increase the likelihood of “copycat” killings; indeed, less than a week after the Atlanta massacre, another mass shooting in Boulder, Colorado, killed 10 people. It’s important for news outlets to cover large-scale attacks in a way that doesn’t aggrandize the perpetrator.

“Whether something becomes culturally viewed as an act of terror is very much separate from the policy implications,” DeFoster said. “A lot of times what we’re really talking about is the role of journalists to take the lead in public discourse, and that’s a really powerful position.”

Besides the lack of a standardized approach, mainstream media faced other challenges when covering the Atlanta mass shootings. Many newsrooms did not have reporters who could speak the languages of the communities affected. But some believe that excuse is an oversimplification of the media’s flawed coverage of racialized communities.

“Community media offer a space for collective mourning, for mobilizing resources, and community organizing,” CUNY’s Rajagopalan said. “Community-based journalists may personally know the families that have suffered the violent crime that they’re reporting about, so they may have greater access and trust.”

In other words: mainstream media’s lack of ties to some communities hinder their ability to cover them effectively, even if they employ reporters who speak the community’s language.

Park doesn’t think that the Korean media’s coverage of the Atlanta shootings was perfect. It used anonymous quotes and rapid-pace publishing.

something on my mind: Korean journalism (in both mainland and America) relies on anonymous sourcing. with mainstream US media scrambling to piece it together, how will US media keep up with Korean reporting? will they buck newsroom traditions and rely on Korean reporting? https://t.co/Zq0DzEIhdX

but I really want to stress their reporting — as a Korean speaker and former journo — can feel fast and loose. unsubstantiated reports and 100% anon sourcing stories are risky https://t.co/unz2hNv8Tg

Often times, you just can’t replicate the success of ethnic media. You just can’t. So why not work with them, get them to help you understand the situation better, and give them the visibility/financial/etc. boost they need?

But these outlets played a critical role in not only serving the communities affected by the Atlanta shootings but also in shaping our conversation around the tragedy.

“Those [Korean] papers will stay on the case,” Park said. “They will cover the aftermath long after everybody else has left.”

Natasha Ishak is an international journalist from Indonesia based in New York City. She has had stories published in Fortune, Vice, Gothamist, The Nation, the Women’s Media Center, The Jakarta Post, and others.

On March 17, 2021, Jessica Lang pauses and places her hand on the door in a moment of grief after dropping off flowers with her daughter Summer at Youngs Asian Massage parlor where four people were killed in Acworth, Ga. Curtis Compton/Atlanta Journal-Constitution via AP.