After the right-wing social media network Parler was taken offline overnight, self-described ‘Parler refugees’ flocked to another messaging app, Telegram in droves. There they were met with a large-scale spamming effort by the left.

For the second consecutive day,  members of the left have spammed ‘Parler refugee’ groups minute-by-minute with long transcripts of movies, memes and song lyrics, making it near-impossible for them to follow the conservation.

Opponents of the far-right have also played songs like ‘Baby Shark’,  as well as alarms and sirens repeatedly over voice chats, drowning out members who attempted to discuss conspiracy theories like QAnon and their support for President Trump.

Telegram is an encrypted messaging service.

In between spam messages from those infiltrating the group, members of the far-right have posted anti-semitic posts, false claims of voter fraud and messages deriding Black Lives Matter and Antifa.

The Feed spoke to several people who were trolling the ‘Parler refugee’ groups. One man in his 40s from the US said he found one chat – that has grown to 16,000 followers – after it was broadcast on Parler.

He told The Feed he’s aiming to “prevent the spread of this corrosive ideology” and had been playing ‘Baby Shark’, Niki Minaj songs and “awful x-rated hip hop” over their voice calls.

“I’m here to stop this bullsh**. I only started after The Capitol went down,” he said.

“Myself and others [who are] like-minded are following them around to break it up,” he added. 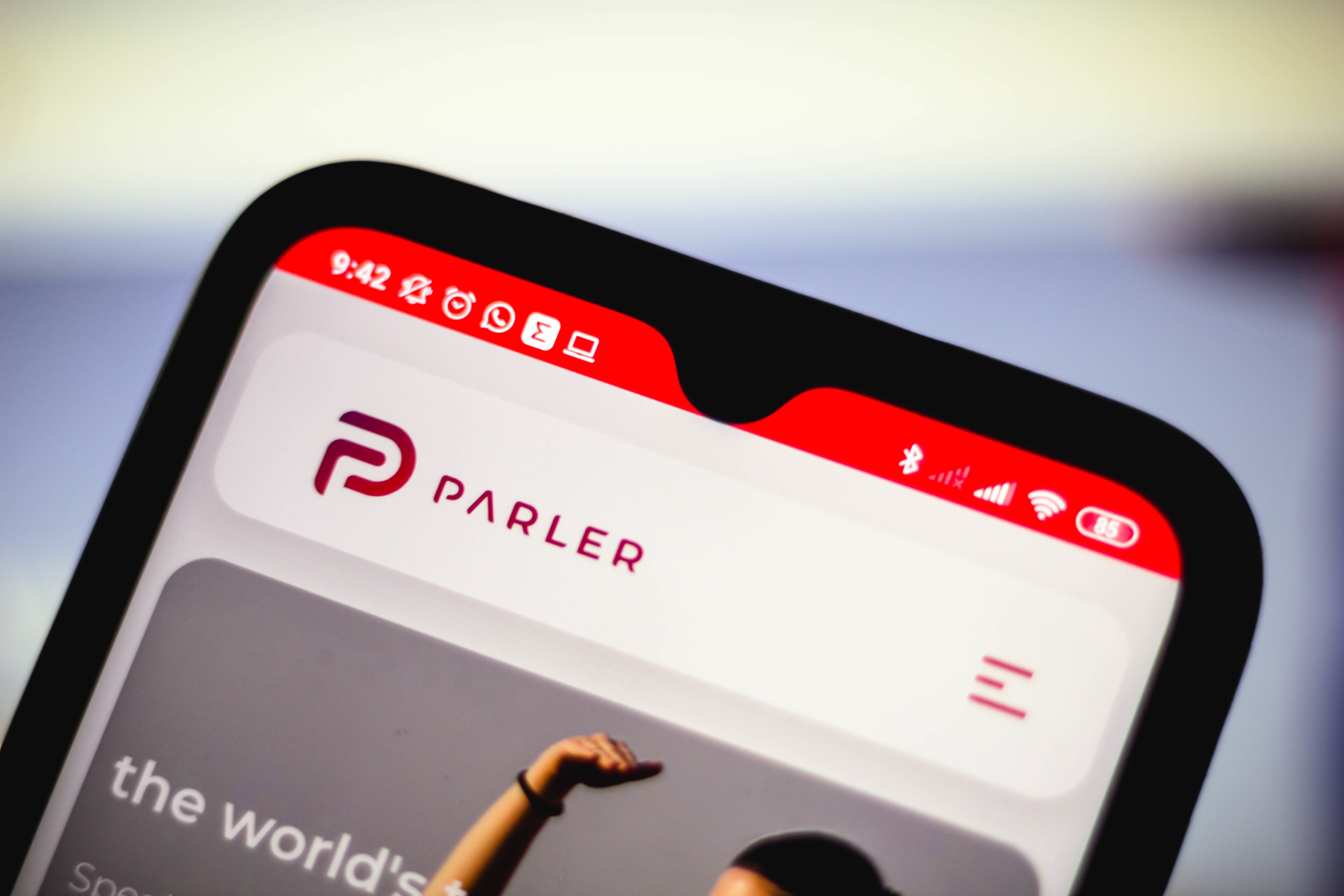 The Parler logo is seen displayed on a smartphone.

Another person, named ‘Aunt Ifa’ – a play-on the anti-fascist acronym ‘Anti-fa’ –  said they live “off trolling Nazis” and was banned from the same group chat after an hour.

The user said they joined the group after seeing a post on a left-wing Subreddit that called on people to spam the group.

“This ain’t my first rodeo of sh**posting,” the user, who asked to be anonymous, told The Feed.

“Considering the Nazis are a direct threat to my family, friends and loved ones, I’d say a lot scares me about their rhetoric.” 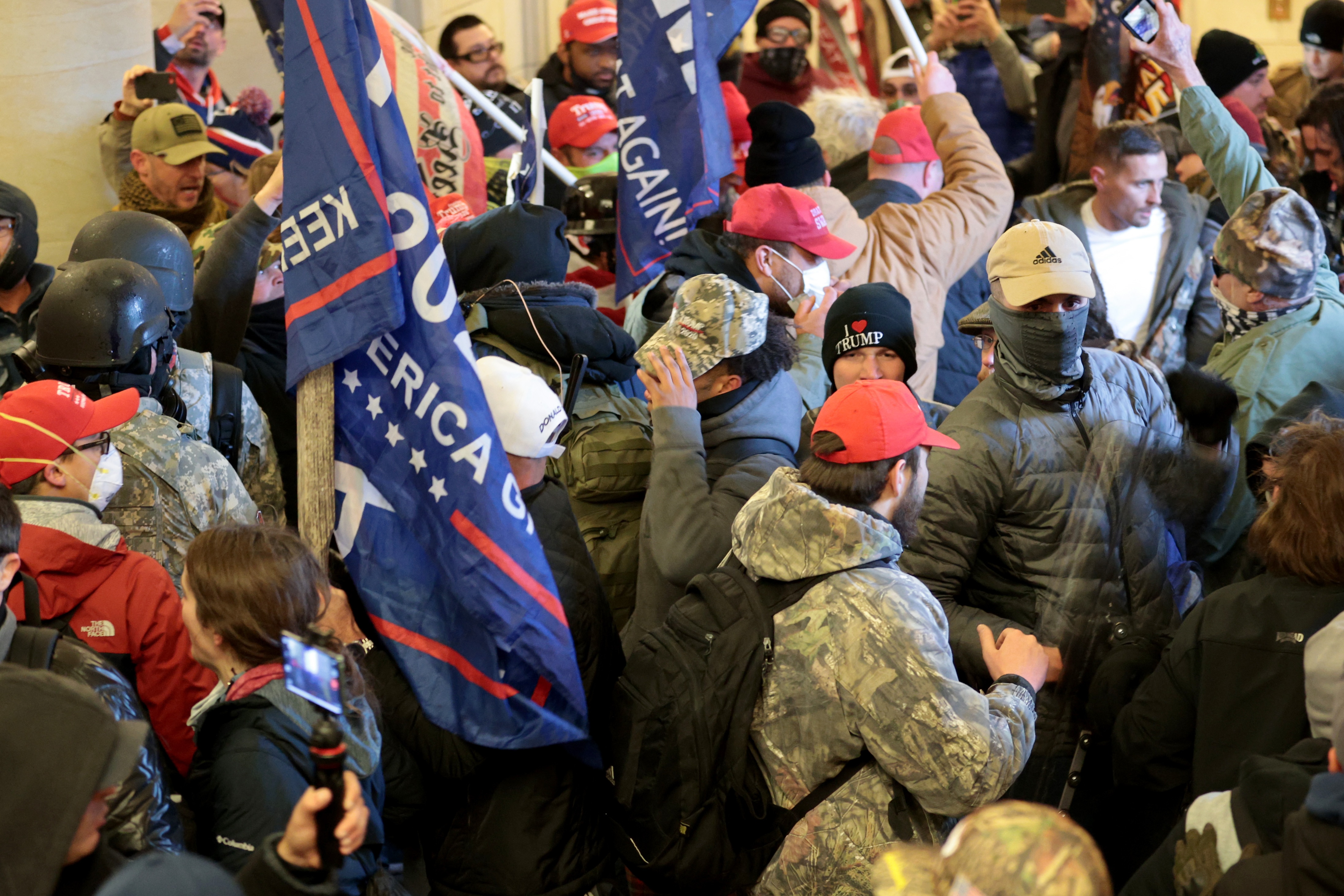 Protesters gathering inside the US Capitol Building on 6 January, 2021 in Washington, DC.

One user, who had been making strange noises over the voice chat and posting memes, said spamming the groups was just a bit of “fun”.

He told The Feed he trolls Neo-Nazis and the far-right “several times a week”, mostly on Twitter.

“They do not listen to logic, so [to] make them the butt of the joke is the only way they seem to think about actual consequences,” he added.

The large-scale trolling of the far-right on Telegram groups comes as Amazon, Apple and Google have all booted Parler from their platforms in little over 24 hours.

In a statement, Apple said it removed Parler for allowing “threats of violence” after the platform failed to submit a detailed moderation plan within 24 hours in relation to Wednesday’s siege of The Capitol.

Gab’s CEO, Andrew Torba, claimed the site gained around 600,000 new users on Monday and that his team added 10 new servers to cope with the sudden demand.

While encrypted messaging service, Telegram, has grown to more than 500 million users since it was launched in 2013.