Facebook posts shared thousands of times claim that Walmart will offer a bag of groceries and a $75 voucher to mark its 60th anniversary. This is false; a spokesperson said Walmart is not offering such a promotion, and the anniversary of the opening of the company’s first store is not the date given in the posts.

“Walmart is going to celebrate its 60th anniversary on March 17, 2021, and In order to help our loyal customers every person who has shared&commented before March 17 @11pm, each will receive one of these bags full of groceries and a $75 voucher delivered to their door on March 18th, 2021,” a March 16, 2021 Facebook post says. 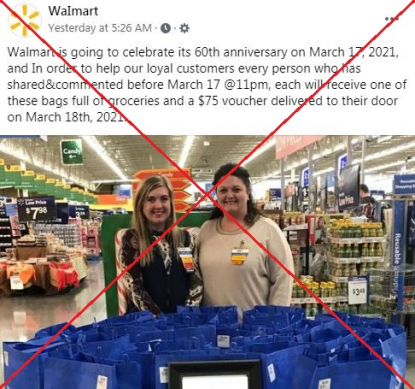 Another post making the claim also appears on the same Facebook page, which describes itself as an “unofficial community facebook page.” The page was created on March 15, but has already garnered over 20,000 likes.

And an album on the page that also features the text of the claim has been shared more than 133,000 times.

“I can confirm this is NOT a promotion Walmart is running,” a spokesperson told AFP by email when asked about the claim.

The posts also claim that Walmart’s 60th anniversary is on March 17. But the company’s first store opened on July 2, 1962, meaning that anniversary is in 2022.

AFP Fact Check has previously debunked a similar false claim about Walmart offering a $75 coupon to mark its anniversary here.