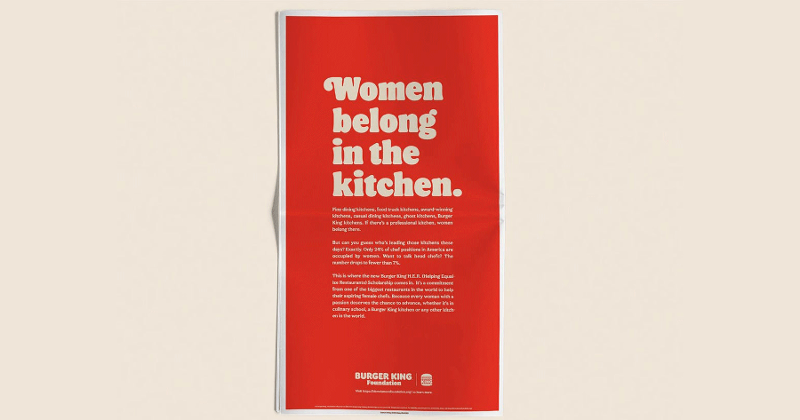 An effort by Burger King to highlight the lack of women in head chef positions and promote a new scholarship program for the chain’s female workforce, did not quite have the reaction the company’s marketing team intended.

The controversy started with a full-page newspaper ad the company took out on Monday. It featured the phrase, “Women belong in the kitchen” in large, bold letters in the chain’s unique type font.

It’s only underneath in much smaller letters when the company says, “If they want to, of course,” before going on to describe the lack of women in head chef positions in the world’s restaurants.

The company highlighted the issue as part of International Women’s Day, and used it to announced a scholarship program, called “Burger King H.E.R. (Helping Equalize Restaurants) Scholarship, which will go to female employees who want to pursue a culinary degree.

Meanwhile, the company’s U.K. division tweeted out just the headline before following it up with details in a subsequent thread.

Women belong in the kitchen.

The tweet came under fire from people who felt that Burger King was using a hurtful phrase as “clickbait” to get attention.

I get that you were using this comment as bait for a larger conversation to actually empower women. But listen to all the women telling you that using a sexist comment as bait isn’t cool. This was the first tweet I saw on international woman’s day.

Its scholarship program, from the Burger King Foundation Scholars Program, has awarded $3 million in scholarships to team members, and the H.E.R. Scholarship will help employees pursuing a degree in culinary arts.

Why would we delete a tweet that’s drawing attention to a huge lack of female representation in our industry, we thought you’d be on board with this as well? We’ve launched a scholarship to help give more of our female employees the chance to pursue a culinary career.

By later on Monday, however, Burger King acknowledged that the tweet could have been done differently.

“We are committed to helping women break through a male-dominated culinary culture in the world’s fine-dining restaurants, and sometimes that requires drawing attention to the problem we’re trying to help fix,” the company said. “Our tweet in the U.K. today was designed to draw attention to the fact that only a small percentage of chefs and head chefs are women. It was our mistake to not include the full explanation in our initial tweet and have adjusted our activity moving forward because we’re sure that when people read the entirety of our commitment, they will share our belief in this important opportunity.”