Despite a growing list of challengers, Amazon remains the dominant force in the global smart speaker market, accounting for more than a third of all sales in the quarter, according to a new report.

According to an analysis from Canalys, Amazon sold 10.6 million smart speakers in the third quarter, good for a 36.6 percent market share. Amazon smart speaker sales rose 66 percent over a year ago, an impressive stat given Amazon’s history as a pioneer in the market.

Canalys pointed to a strong Prime Day and a new speaker trade-in program as major contributors to Amazon’s surging sales. Those efforts helped Amazon gain significant market share over the second quarter, when Amazon accounted for a quarter of smart speaker sales.

Chinese e-commerce giant Alibaba checked in at No. 2 with 3.6 million speakers sold, good for a 13.6 percent market share.

Google sold 3.5 million smart speakers in the quarter, down 40 percent from 5.9 units a year ago. Google was the only major smart speaker maker to record an annual decline in sales. Google also saw a year-over-year drop in smart speaker sales last quarter.

That’s a trouble sign for the tech giant, and it comes as smart speakers sales as a whole rose 44 percent over the prior year in the third quarter.

“The challenging retail environment and shipment decline compelled Google to seek more partnerships such as with Spotify, to drive sales through different channels,” Low said. “We are also seeing similar collaboration trends in China where Alibaba leveraged its retail relationship and channel capabilities to run smart speaker collaborations with brands such as Starbucks, Budweiser, Abbott and Oreo among other local and international companies.”

Both Amazon and Google recently introduced new smart speakers ahead of the busy holiday shopping season. As part of its big devices event in September, Amazon refreshed the flagship $100 Echo speaker and introduced the new $200 high-end Echo Studio. A few weeks later, Google unveiled a refreshed Nest Mini, formerly known as the Google Home Mini, with double strength bass and the ability to connect speakers together to build a sound system. 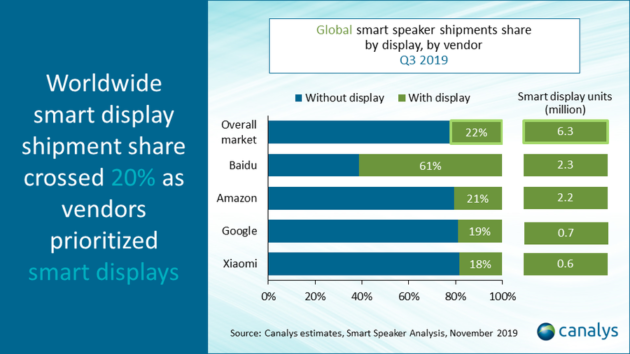 While Amazon led the way in smart speaker sales, Chinese search giant Baidu sold the most smart displays, per Canalys. Baidu’s smart displays outsold Amazon’s line of Echo Show devices by a slim margin — 2.3 million versus 2.2 million. Baidu was the only company on Canalys’ list to get the majority of its sales from smart displays with screens.

The smart display category, with 500 percent sales growth to 6.3 million units sold in the quarter, is growing in importance. However, Canalys analysts cautioned that smart display makers still have some important questions to answer.